Four star review of At Bay by John W. Mefford

The first in a relatively new mystery/police procedural was a quick read. I particularly liked the protagonist, Alex. She’s an FBI agent who’s lost her memory in an auto accident. As she works a case, mainly against doctor’s orders to take it easy, she also juggles her home life and her own propensity for doing too much. The kids, in particular, were well-drawn, as was her relationship with her gay former/current partner. Although certain events in the book were hard to swallow, overall, this was a good start to a series.

5 star review of Child of Chaos by D. E. Williams

This book has an intricate plot. At first we’re made to think Tridia is the only survivor of the Chesan race, but later we learn differently. The story really starts when she’s a teenaged assassin for the Hierarchy, the ruling body of one set of worlds. In an attempt to reach the highest level, she requests a Challenge Hunt. We also see her and this universe through the eyes of Ambassador Brenden Aren, and a small part of it through the eyes of Drayden and those of his lookalike Davik. Many other prominent characters have roles in the story, most prominently, Empress Dojene. Each of these characters is distinct and well-rounded.

Posted by Joyce Hertzoff's Fantastic Journeys at 6:51 PM No comments:

If it's Friday it's Knitting

Okay, so I'm a day late. This is an account of a trip I took last February, sponsored by a local knitting store. My friend and I are already signed up for next February.

The adventure began as we boarded the train in Albuquerque, where most of two couch cars were reserved for our knitting group of sixty-three (including a few spouses). After some exploration of the train cars, the instructors decided to postpone the classes they’d planned for the train ride. Instead, we ate dinner or gazed at the scenery from the observation car. As we crossed the Arizona border, we were treated to a gorgeous sunset.

The trip was organized by The Yarn Shop of Knob Hill in Albuquerque as a wonderful knitting weekend at La Posada in the historic Arizona town of Winslow. La Posada. La Posada embodies the visions of both Mary Elizabeth Jane Colter, the hotel’s renowned architect, and Allan Affeldt, its current owner. But the story really begins with Fred Harvey, who “civilized the west” by introducing linen, silverware, china, crystal, and impeccable service to railroad travel. Harvey developed and ran all the hotels and restaurants of the Santa Fe Railway, eventually controlling a hospitality empire that spanned the continent. La Posada was formerly one of the Harvey House restaurants as well as the Arizona headquarters for the Santa Fe Railway, the property had been renovated in a Southwestern style hotel, restaurant and train station. The hotel rooms contain handmade furniture, native rugs and rug hangings, and silver framed mirrors. The gardens are filled with local plants. A perfect setting for a knitting retreat. 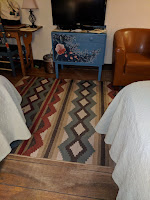 My Saturday morning was filled with classes on Kitchener stitch for completing the toes of socks, taught by Becky Arnold. Next up was speedy stranded swatching with Celeste Nossiter. After a wonderful pot luck snack/lunch, I learned to create the edge for Orenberg Lace from Ahza Moore. She showed us many examples of her own shawls and runners. 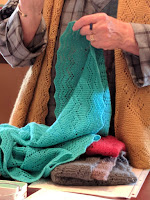 While several of the knitters went to the Snowdrift Art Space for a tour, I joined a group of sixteen who traipsed three blocks, against the wind the entire way, for a photo op: Knitting on the Corner in Winslow Arizona. 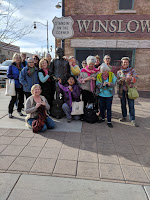 We returned to the hotel for dinner. The restaurant serves excellent meals using locally sourced ingredients. Every bite was delicious of my churro lamb, duck cassoulet and elk sausage with potatoes, veggies and beans. Others had coq au vin or a vegetarian plate full of vegetables. 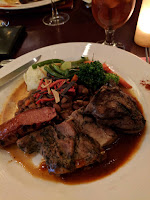 After dinner, a couple more classes were given. I attended one on brioche knitting with one color yarn.

The next morning, after a good night’s sleep, we learned the train was delayed. It eventually arrived around 8 A.M. and we boarded for the trip back to Albuquerque. It had snowed during the night in some locations and we saw the remnants along the way. 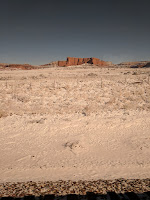 Knitting isn’t a hobby, it’s a post-apocalyptic survival skill.
Over the next several Fridays, I’ll explain the above sentence. Meanwhile, what do you think it means?
A couple of years ago, I came across an advertisement for a shirt with that motto on the front, along with images of a skull, crossed knitting needles and a couple of balls of wool. I couldn’t resist. When I wear it to sci-fi conventions or meetings of knitters, the first thing people do is give me a thumbs up, although some will add, “and crocheting.” The second is to ask where I got the shirt. Unfortunately, the company that originally made it doesn’t have it in their catalogs anymore, but there is another site that has a similar shirt without the skull. I have a long-sleeved version from the second site.
I’ve been knitting since I was five or six. In that time, I’ve made all sorts of sweaters, scarves and hats. In fact, when I left my first job after college, the people I’d worked with gave me a gift certificate to a near-by knitting store because they knew I’d enjoy that more than a plaque.
A few years later, when four women I knew were pregnant at the same time, I made four different baby blankets in less than six months.
So I’m a knitter. Next week I’ll tell you some advantages to knitting that you may not know. Another week I’ll talk about the trends in knitting today. I’ll even describe the fun a friend and I had on a train/knitting trip last February.
Getting back to that first sentence, I’m also a writer and one of the stories I’m working on takes place after a disaster of unknown origin or extent. Folks traveling on a train become stranded near a very small town in August, some with only the proverbial, but true, shirts on their backs. They take up residence at a motel. A few of the women, and men too, collect any yarn available in the town, and get to work making whatever they can for themselves and the others: hats, scarves, gloves, socks and sweaters. That’s what we’d have to do if there ever were such a wide-spread apocalyptic event.
Posted by Joyce Hertzoff's Fantastic Journeys at 7:39 PM No comments:

Bear Kingdom and the Golden Sword by Stacie Eirich  5 stars

Suzie, her twin brother Jack and two friends are tasked with rescuing the Tiger Queen, her cubs and the Book of Destiny in the Bear Kingdom. This is obviously the sequel to a story that takes place in the Tiger Kingdom (to be followed with another in the Dragon Kingdom). In this middle grade book, the heroes are armed with magical articles and helped by rhyming mythical animals. It's a heart-warming tale despite the cold climate of the Bear Kingdom. Even the villainous Bear King turns out to be good, but under an evil spell. No mention of who cast it. I enjoyed this easy read.

When someone steals many of the royal roses, Ned, the Thief Catcher, is asked by the Emperor to find the thief and keep them from stealing the red rose of love. Thus begins a much more complex romp than I expected at first. Little is what or whom they seem. So many wonderful characters inhabit this story, but my favorite is Jenni, the lisping sprite. Head hopping and occasional misspellings didn't deter my many chuckles or that lol moments.

Posted by Joyce Hertzoff's Fantastic Journeys at 7:39 PM No comments:

Good text for the course I took. The lessons in the book tended to be basic ones needed by anyone who writes science fiction and fantasy, as I do. They led to good discussions in the online classroom. They also gave me some ideas of how to improve at least one of the stories I'm working on. This is a book that should be updated/revised every few years because the trends in writing, publishing and marketing are changing at a rapid rate. I had the second edition, and some of the material was already out of date.
Posted by Joyce Hertzoff's Fantastic Journeys at 8:56 PM No comments: