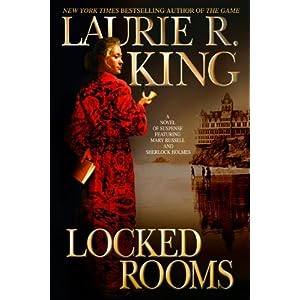 Mary Russell and Sherlock Holmes in early twentieth century San Francisco. Throw in Dashiell Hammett and a few other interesting characters. Mary must unlock the rooms in her brain to solve the death of her parents and brother, always thought to be an accident, and their Chinese servants. Wonderful exploration of her suppressed memories. I also enjoyed seeing San Francisco through Sherlock's British viewpoint. I'd heard about this series and when a friend gave me a copy of this book, I gave it a try. If the others are as good, I'll read the entire series.

The Deadly Art of Deception by Linda Crowder - Four stars

Caribou King runs an art gallery in a town on the inner passage in Alaska that gets many tourists during the season. Her friend returns a year after the death of the friend's husband, an artist. Everyone lies to Carbou. The plot is convoluted, and hard to follow in places. But I enjoyed the story and characters, and will eventually read the sequel.
Posted by Joyce Hertzoff's Fantastic Journeys at 6:32 PM 1 comment:


Good detective story with excellent descriptions of the settings. Bernadette has her hands full when financial and petroleum interests try to use the invention of a scientist to manipulate the trade of oil stocks and the scientist has his own ideas. I tended to skim over the parts about the weapons people used. There were lots of bodies. Although we were in the heads of several of the players, we never really got to know most of them.

I'm so glad this trilogy had an ending that was the logical conclusion to this saga. The writing is superb. The combinations of second person for Essun and third for her daughter, Nassun, and of course first for the narrator, Hoa work to separate the three stories that are all part of the same story. As a scientist, I'd like to know more about how the Plutonic Engine worked, but don't need that to comprehend what's happening. This is the first of Jemisin's work that I've read, but I'll definitely read more. Loved it.