Murder on Magazine by Julie Smith

So good to be back with Skip and the gang in New Orleans. This time, a terrific new character is introduced. Cody, or any of the other names Cordelia goes by, was sold into prostitution by her mother, but in escaping, she thinks she kills the whale. As Skip officially investigates the death of the man who was monitoring Cody, the teenager does her own investigation. Who was the whale? Did he kill the other man? Where will Cody be safe? And through it all are the dogs. And opinions, mainly negative, on the Airbnb situation in NOLA. Hope this means we’ll see more Skip Langdon stories, and that they include more Cody.


Another wonderful Wells and Wong detective story. When the head girl at Deepdean School for Girls dies during a bonfire, Daisy and Hazel are on the case. They witnessed how the victim and her group of big girl prefects had terrorized the younger girls at the school. Malicious rumors and secrets began to turn up after the death. Along with their dorm-mates, they conclude that the prefects are the only viable suspects. Hazel’s ‘voice’, telling the story as she recorded it for their Detective Society, is wonderful. Thanks to my daughter, I now have three more in the series.


Posted by Joyce Hertzoff's Fantastic Journeys at 7:49 PM No comments:

Review of The Silent Shield by Jeff Wheeler

This is the fifth book in Jeff Wheeler’s reworking of the Arthurian legends. It’s the second about Trynne Kiskaddon, the daughter of the protagonist of the first three, Owen Kiskaddon, and a very worthy successor. I did guess early on that she’d marry [spoiler]. The action is credible. Many of the characters are well-drawn. I’m looking forward to book six. Hoping for the return of Trynne’s mother and father. Love the theme of history repeating itself.

Posted by Joyce Hertzoff's Fantastic Journeys at 1:51 PM No comments: 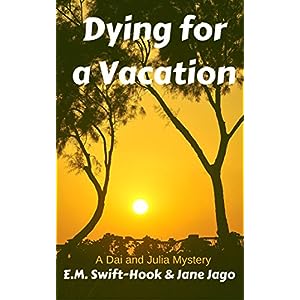 Dying for a Vacation by E.M. Swift-Hook and Jane Jago

In an England where the Romans were never kicked out, Dai Llewellyn is investigating the stealing of antiques in England, while his pregnant (and Roman) wife Julia has escaped his overbearing attention by traveling to Egypt. This is a strong addition to the Dai and Julia series of mysteries. The addition of Egypt and an archaeological dig as setting for a part of the story was great. I also love the addition of Hook-Beak’s wife. She’s a wonderful character. And of course, Dai and Julia solve the crimes.

Posted by Joyce Hertzoff's Fantastic Journeys at 6:45 PM No comments: