Our Thanksgiving holiday travels ended late last night, but I do have a review for you:

I don't know why I avoided starting this series for so long. The first, about Ceony's early days as an apprentice to Paper Magician Emery Thane, was a delight. In a world where man-made materials can be magicked, she would rather be apprenticed to a metal magician, but comes to appreciate what paper can do.  As she fights to return Thane's heart to his chest, where she's replaced it with a short-lived paper heart, she loses hers to him. Looking forward to the rest of the series.
Posted by Joyce Hertzoff's Fantastic Journeys at 8:51 PM No comments:

A mosaic that had trapped all magically beings was broken apart thousands of years earlier. The remains are in the basement of a small museum in a small midwestern town. Twins Chloe and Zoe’s grandmother runs the museum with their help. When they discover missing pieces, and Chloe realizes she can put them in, their adventures begin. Filled with all sorts of magical creatures, including good and bad witches, this was a scary but fun read.

Eye of the World by Robert Jordan 5 star review

The first book in Robert Jordan’s series was just that, an eye into the world of the series, an introduction of many of the characters, and a great fantasy story. When the three young men, Rand, Perrin and Mat left their sleepy hamlet, they were only beginning to believe that all the tales they’d heard growing up were true. The world-building is first rate, and each character has their part to play.
I feel like I’m going on an adventure of my own as I continue to read the series. This is what epic fantasy should be.


I had trouble copying and pasting the cover images Tuesday night, but was able to this morning.
Posted by Joyce Hertzoff's Fantastic Journeys at 9:07 PM No comments:

This story of a lobbyist who is shown the harm he's doing, then realizes those who open his eyes are manipulating him too. But is there a way out of his life? He spends a lot of time pondering his life, how he got where he is and what his values are.


Posted by Joyce Hertzoff's Fantastic Journeys at 5:43 PM No comments:

Today, instead of a blog about knitting, I'm happy to post an interview I did with Christina (DZA) Marie

What genre(s) do you write in and why? Do you write flash fiction, short stories, novellas and/or novels? Graphic novels, anime or comics? If you do multiple genres and/or lengths, which do you prefer? Have you ever written any poetry?

While I have written the odd sci-fi and even (bad) horror story, my true heart lies with fantasy, specifically epic fantasy. I’ve participated in short story and flash fiction competitions, enough that I gathered the best and funniest works into a collection titled Gary Geckos Guide to Getting Your Humans to Get Together (and Other Short Stories). 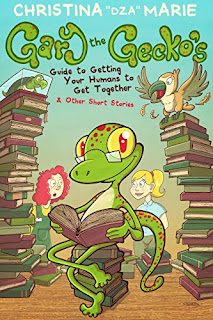 I’ve also published a handful of novellas, which I prefer more than short stories simply because I like having room to maneuver. This year has been my first venture into graphic novel territory with the start of my new series Sovadron. It’s an epic fantasy (grimdark?) story with a world based on post-colonial America, and features demons, gods, werewolves, giants, goblins, and all that good stuff.

What writers do you admire? What are you currently reading?

I admire many writers, from grimdark George R. R. Martin to hilarious YA surrogate-dad Rick Riordan to sarcastic steampunk scientist Robyn Bennis. My bookshelf is bursting. At the moment, I’m borrowing my roommate’s trilogy Daughter of Smoke and Bone by Laini Taylor. It’s basically grimdark fantasy for YA audiences. Good stuff!

Have you self-published anything? What was your experience like?

This year has been a whole exploration in self-publishing. In the summer I released my short story collection Gary the Gecko, and a month later I published my urban fantasy novella The Minnesotan Witch. On November 16th, I’ll be self-publishing the first chapter of Sovadron.

I’ve found that the success of self-publishing depends a lot on your preparation and how much you’re willing (or able) to outsource. For Gary the Gecko, I was completely unprepared and sold only one copy (to my roommate). Minnesotan Witch went better, primarily because I gave myself time to promote ahead of the fact and recruited people to leave honest Amazon reviews and blog posts.

Sovadron is going to be difficult, mostly because it’s a much more involved project, being a series. It’s also a graphic novel, which is going to be more tedious to convert and upload onto Amazon Kindle. Not to mention I, as the publisher, have to pay for everything, including the illustrator—which is why I can only publish one chapter at a time rather than one book at a time.

However, self-publishing is also very freeing. When you’re doing traditional publishing (re: going to a publishing house), everyone gets their sticky fingers in your work: the editor, the publisher, the agent if you have one. But with self-publishing, it’s all your vision. You have complete creative freedom.

What are the hardest kinds of scenes for you to write? Romantic? Sex? The death of a character? Fight scenes? Others?

The hardest scenes for me are the “filler scenes,” I guess you could call them. I bounce around a lot when I’m writing, always hitting the most important, most intense scenes first—which means all those “difficult” scenes you just listed as examples are technically the easiest for me to do because I love doing them.

The result is I get the intro of the book written, the ending, the climax, and several other big moments. But then I have to add the link-up scenes, the exposition, the less exciting but still very important moments that provide a break from the action or give us a clearer view of the character. Those are difficult because they’re not as fun to write.

How much time do you spend on research for your writing?

Probably more than I should, and I blame my inner history geek for that. Although, I never regret spending time to thoroughly research a culture or part of history for a story because the whole point of research is to learn things that you never knew before. And, too make things even more interesting for me, when I’m trying to decide what real country or person to base my fantasy culture or person on, I usually choose one that I don’t know about or have a gap in my learning specifically so I’m motivated to learn more about it.

For example, in Sovadron, the new country of Luria is based off of post-colonial America, which I already knew quite a bit about. But I didn’t know that much about 18th/19th century England and France—which is what Daerstyn, the country that used to rule the former Lurian colonies, is based off of. The dwarves are based on the Inuit and Alaskan natives, so I had to research their culture and the effect of colonialism (spoiler alert: it sucks). And on top of that, several major characters are in the LGBTQ+ community, which meant learning about history I already knew in a completely different light as I read about how those people had to navigate in that kind of world. It’s fascinating.

Your character decides to go a different way than you planned. What do you do?

Usually: I just go with it. Having a character do something unexpected is a very good thing, because it means I, as a writer, have done my job. Humans are unpredictable and difficult to manage, so when a character is the same, then that’s great!

However, if there is a specific way a story has to go, then I do either one of two things. I either change the character, or change the situation of the story. Sometimes changing the character is easy (re: if I need the character to not enter the dark cave until later, but they’re naturally adventurous and spontaneous, then I’ll probably give them a crushing fear of bats—which live in caves—that they have to overcome in the story, thus adding another layer to the narrative). But if it’s too difficult or I like the character as they are, then I change the situation, usually by throwing some more bad guys at them so they’re occupied/injured/can’t muck up my plot.


Christina “DZA” Marie runs the feminist geek blog Dragons, Zombies & Aliens—as well as the YouTube channel of the same name—and is a sci-fi and fantasy author. She’s published several short stories and novellas and is one of the writers of the global illustrated novella series Earth’s Final Chapter by Endless Ink Publishing. Her hobbies include smashing the patriarchy, paying for horror movies and then being too scared to actually watch them, and defending her furniture from her roommate’s evil cat.

Posted by Joyce Hertzoff's Fantastic Journeys at 7:59 PM No comments: