The book was chock full of good advice on writing for online and print publications. Some of the information was out-of-date, which is to be expected in the fast-changing publishing world, but I still learned a lot. Writers don’t just write articles. They have to research on the topic but also research publishers. They have to pitch what they’ve written and develop a relationship with the publishers of the magazines they write for. And they have to have a presence online. Saleh even goes into contracts. As a fiction writer and occasional writer of articles, this was a helpful book.

Posted by Joyce Hertzoff's Fantastic Journeys at 7:27 PM No comments: 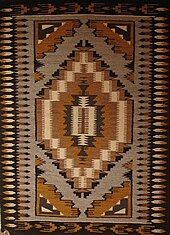 Sheep to Shawl part 1: from an article in The Yarn Shop at Nob Hill newsletter:

Sheep in New Mexico, Part 1 How and when did sheep arrive here


In 1598, Don Juan de Ornate, was awarded the contract to settle New Mexico for the Spanish government, he brought approximately 5,000 Iberian sheep called Churras to what is now the state of New Mexico. These animals were the earliest domesticated farm animals in North America and are the forefathers/mothers of the contemporary Navajo-Churro sheep breed.

The sheep population thrived under Spanish and Territorial rule. These sheep became important to the Spa​nish economy. Many of the sheep raised in the territory were exported to Mexico trading posts for food.

During Spanish rule, the Spanish basically abandoned their cows and became sheep and wool raisers. The Spanish preferred the taste of Churra meat over beef as it was sweeter tasting. Also, because cattle were easier to drive long distances after a raid as compared to a flock of sheep, the beef herds were less likely to be raided.

Only the Navajo were interested in the sheep the Spanish brought with them, especially for their wool. The Navajos would raid the Spanish flocks because they wanted their wool. The Navajo were highly skilled weavers at the end of the 18th century. The blankets and rugs that were created by these artisans were of superior quality and sought after by many traders in the territory.

Up until 1821 there were more sheep in the territory (now New Mexico) than cattle and humans. Once numbering in the millions, the Churra breed almost became extinct in the 1860's. The United States Government at this time considered the Navajos an enemy of the government and destroyed their livestock, crops and orchards. In 1868, the Navajos were allowed to return to their homeland with a few Churras and they rebuilt their flock, hence the name change to Navajo-Churro.

Posted by Joyce Hertzoff's Fantastic Journeys at 6:30 PM No comments:

The first in this series brings Gabe McKenna to Albuquerque from New York after his aunt’s death to learn that, as her only living relative, he inherited her house in Albuquerque and a property in Catron county. But it’s a book by his great grandfather called Red Gold, about the Lost Adams gold. His search for both the property and the gold is fraught with death and intrigue. Luckily he finds old and new friends to help in his search. I enjoyed this, partly because I know the places Gabe visits. I’ll definitely read more in the series.

Posted by Joyce Hertzoff's Fantastic Journeys at 8:37 PM No comments:


I’m working steadily on two projects, an Estonian lace shawl from a Craftsy class and a cardigan that has three patterns across each of the fronts, but a friend requested that I make two scarves for friends of hers. Luckily, she loved the picture of this narrow shawl that could pass for a scarf: 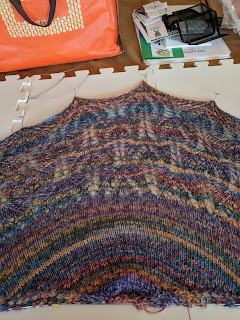 The Competition by Cecily Wolfe

This story about a hundred high school juniors competing in a writing contest at a small college is well written. What the Penultimate means for each of the four main characters, Mary Sofia, Camara, Michael and Jaeden, is clearly explored and made them real. We follow each of them and their friends, especially Julia and Jada, through the ride to the college, their meeting there, the tour of the school, and then the three prompted writing assignments. The last one, prompted by the theme of a turning point in their lives, leads to regrets as they think about what they each wrote. I occasionally didn’t know who was speaking because of the way dialogue was presented, but that didn’t detract from the themes of the story. Titling the story The Penultimate might have differentiated this book from others with the title The Competition.

As noted on the cover, this is a collection of tips, tricks and tales from the Detective Society that Daisy Wells and Hazel Wang formed at Deepdean School for Girls. It also contains a few of the cases solved by their friends, the Junior Pinkertons, i.e., Alexander Arcady and George Mukherjee at Weston School. It’s full of the same kinds of fun as the Murder Most Unladylike series, and complements it by giving us a better chance to ‘hear’ Daisy, Alex, and George’s voices. There’s also an awful lot about detective and spy novels with lists from the author, Daisy and George. Very well done. I’m looking forward to reading the next full-length murder mystery in the series.

Posted by Joyce Hertzoff's Fantastic Journeys at 1:07 PM No comments:

Sorry I haven't posted reviews for a while, but that means you get two today

Four stars. Charming fantasy story for 8-12-year-olds with a history lesson thrown in. Julie and her new friends Jax and Ani explore a supposedly haunted house and a raccoon leads them through a hollow tree and a tunnel to the past, There, the black brother and sister meet Harriet Tubman as she leads a young couple and their child to the underground railroad. Miss Tubman comes to believe Jax when he claims to come from another time. There’s mild suspense. The only indication of the plight of slaves during that time are the fact the couple is fleeing a plantation, the workers in the cotton fields, and the attitudes of the people in the house where Julie is brought.

Five star first book in a trilogy is a novella about the first girl of the Himba tribe in the African desert who’s invited to study at Oomza University in another part of the galaxy because of her mathematical ability. She never went far from her village before but is a master harmonizer and astrolabe designer. As Binti travels with other new students, their ship (which is a living being) is attacked by the Meduse who kill everyone but Binti and the pilot. The Otjize mud she uses on her hair and skin to make her feel closer to home proves useful in repairing the Meduse tentacles. Eventually she communicates with them through an artifact she found in the desert. I’d heard about this series for a while, but was at a convention selling my own books when I learned Okarofor was speaking and signing her books. I bought a copy and she autographed it in her own way.

Posted by Joyce Hertzoff's Fantastic Journeys at 7:28 PM No comments:

All knitters should see this dictionary from Mason-Dixon knitting :