Katy took over her grandmother's ghost-hunting business in a small Minnesota town. She used coffee to capture ghosts. Malcolm arrived in town and used tea in an ancient samovar for the same purpose. At first they were at odds, but eventually teamed up as a series of paranormal events occurred. The combination of scary moments, comedy and romance make for very enjoyable stories. Katy and Malcolm, his brother and a few other characters (and also a few of the resident ghosts and sprites) are great characters.

Using correspondence from seventeen veterans, organized by topic, the author tells the stories of their service and their lives during the forty years since they served. Some of the letters and stories are moving, some are just sad, many are hard to read. Illustrated with photos of the men and women, these stories should be read to help us understand how the war affected the veterans and what did and what should have happened to them afterwards. 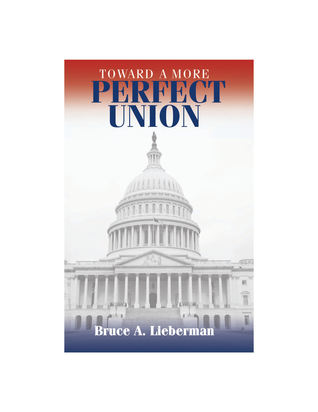 Three star review of Toward a More Perfect Union by Bruce A. Lieberman

The book consists of a series of essays from a specific political viewpoint rather that any objective, non-partisan one. Although I mostly agree with the writer, I found it heavy-handed. Mr. Lieberman obviously loves our country and wants the best for it. His ideas on how to change it seem impractical under current conditions. If you’re looking for a book that supports your own ideals, this may be it.

Posted by Joyce Hertzoff's Fantastic Journeys at 8:36 PM No comments:

My latest sweater, front and back: 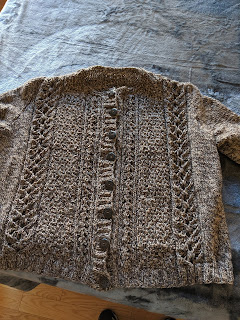 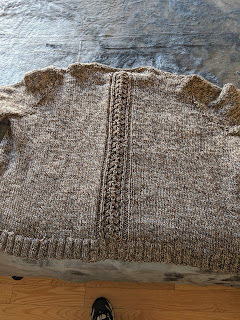 The four-ply yarn is a Cascade 220 with plies of dark brown, tan, beige and gray.
Posted by Joyce Hertzoff's Fantastic Journeys at 9:02 PM No comments:

From a WIP. What do you think?

Someone banged on our door, an insistent rat-tat-tat. “Grab your things and come with me.” Marlene, the attendant for our train car, sounded out of breath. “Hurry. Abandon this car. It’s gonna fall into the ravine. Couldn’t decouple it.” The words tumbled over each other and were repeated a little farther away.
My eyes became accustomed enough to the dark that I could put my arm through the strap of my messenger bag and follow Abby out into the corridor.
Marlene rushed us to a line of people heading down the spiral stairs in the still-hurtling train. She shouted so we could hear her above the increasing noise level, “You’ll have to jump, no matter how frightened you are.”
As I went around the bend of the stairway, I heard, “Geoff, I can't do it.” The little girl at the front of the line balked. She turned to reveal a face covered in tears and a shaking body. “Please don’t make me.”
“Marlene said we have to, Franny,” The teen behind her said. “Toss your backpack first so it's easier.”
I wasn’t sure I could jump either. I slipped the strap off my shoulder, preparing to throw the bag.
Franny finally leaped off, and her brother followed. Next, a younger boy jumped as if he were vaulting into a pool.
I reached the front of the line and looked down. Would I break something if I jumped? At least it was still light outside, and the ground was almost flat. I flung my bag, closed my eyes and jumped, trying to emulate the boy. My fall from the train was broken by the ground and sparse grass. From the siding, I glanced around. Holy moley! The cars ahead of ours were tumbling into a ravine. Any trestle bridge that had been there was gone. The falling train sections pulled our car toward the precipice, too. I gulped, realizing we could still be on it. My stomach clenched as I watched more people jump from our car as it neared the edge. Sparks flew from under the wheels as it neared the edge.

A hundred years from now, after an apocalyptic thermonuclear war, only parts of Melbourne remain. Ethan lives in Newhome, an area outside the damaged center of the city and works as a Forager, going out daily with his crew to find valuable metals in the ravaged skyscrapers and houses. When a group of Custodians is assigned to accompany the group, ostensibly to protect them from Skels, the skeleton-armored humans that haunt the area, Ethan believes they’re really there to root out anyone with mutant abilities, abilities he’s hidden from all but a few. When a convoy sent to establish trade with a Japanese-developed village is attacked by the Skels, the action revs up, especially when Ethan is drawn to the female translator sent with the convoy. I’d rate this 4.5 except for the abrupt ending that requires the next book in the series to find out what happens next.

This was a fascinating look at Michelle’s childhood, education, marriage and her time in the White House. Her rise from a humble beginnings to First Lady of the United States is inspiring. Her efforts to help other girls reach for the stars is a part of her. No doubt she is an intelligent and caring woman. I’m impressed by how much time and energy she has devoted to her family. If you’re looking for a political book, this isn’t it. As she says, politics isn’t her field of interest. For her, championing education for girls all over the world, including the US, is of utmost importance.

Posted by Joyce Hertzoff's Fantastic Journeys at 8:49 PM No comments:

Here's an excerpt from The Crimson Orb, the first novel in The Crystal Odyssey Series.


The ebook is on sale this week
Posted by Joyce Hertzoff's Fantastic Journeys at 6:41 PM No comments: