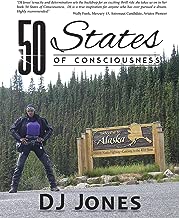 4 star review of 50 States of Consciousness by DJ Jones

DJ Jones is a tall, African American woman who loves her children, country music and her motorcycle, Big Bertha. She describes her adventures and the people she met as she took that 800 pound bike to each of the fifty states in 2006. The story of her journey is accompanied by great photographs. The reader also gets a glimpse of her backstory.

The sequel to Transient picks up the story of mortal humans and vampires several years later. Jonas is in hiding with Anna, but has kept his pledge to NExUS, the worldwide ruling body. He thinks the few remaining humans can work together with the dominant vampires until a human commits a gruesome axe murder. Turns out to be the tip of an iceberg of humans targeting large congregations of vampires, bringing Jonas out of hiding. The story is filled with tension, thrills and chills. The only thing I didn't like were the number of humans (and vampires) died, especially the ones I liked.